Written by Mary Paul
From her column Dwelling with God 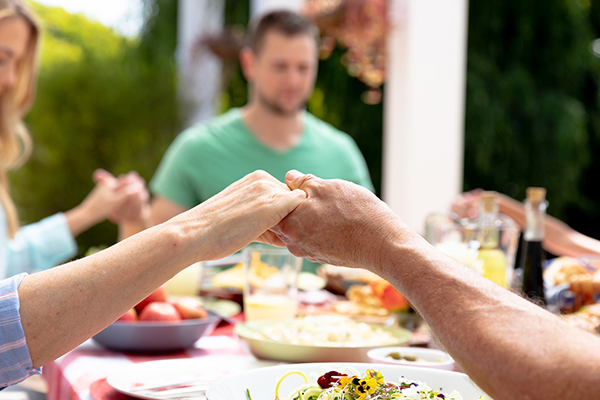 “Above all, love each other deeply, because love covers over a multitude of sins. Offer hospitality to one another without grumbling. Each of you should use whatever gift you have received to serve others, as faithful stewards of God’s grace in its various forms” (1 Peter 4:8-10 NIV).

Years ago, I went on a women’s retreat for our local church. This had been an important event in the life of the congregation and had historically been a well-attended gathering. That year I was driving up to the retreat center… mad. The team who was leading the event had done more preparation, prayer and planning than ever before, but in the days before the event, one person after another called to say they couldn’t make it after all. Some of the excuses felt legitimate, but a bunch of the reasons seemed pretty weak. It had been a hard season for the church and as pastor I was feeling the need for something “successful.” I had to do the usual pastoral work of letting go of the frustrations and turning towards those who had actually shown up. As the retreat began, I can’t say I was all the way there in my spirit.

At some point early in the retreat, one of the women spoke vulnerably about her sense of loneliness. She went on to say she had been talking with her husband about the possibility that they may need to find another church. All my pastoral alarm bells were going off, but I had enough wisdom to be still. Similar stories were shared with nodding heads and affirmations. Participants voiced shock as all seemed to assume everybody else was connected and thriving, and they were the only ones feeling isolated.

The prayers of scripture and the promises of God are for a gathered people and cannot be fully realized in isolation.

The women connected in their shared loneliness but also began to talk about its roots. They named a willingness to be vulnerable and bold—boldness to ask help from others, boldness to approach each other rather than assume rejection, boldness to enter into the life of the other. The isolation was rooted not in rejection but in risk aversion and “respecting people’s privacy.” The beauty was they didn’t name a church program as the “fix” for the problem, the solution was in new ways of seeing each other and relating. By the end of the retreat, I realized what an incredible gift the weekend was for those who attended and, in time, the life of the whole church. The retreat didn’t hit the “success” evaluations based on numbers attended or new people introduced into the community, but the overflow of the change was profound.

This experience occurred before the influx of social media and iPhones. Today, reports of isolation inside and outside of the church are widely recognized. There is a local church near me which describes its calling as a church to “End Spiritual Loneliness.” I don’t know their strategy, but I think they have named something that has invaded our communities. Whether by the distractions and divisions created by social media, or a continuation of risk aversion and “respecting people’s privacy,” there are a lot of people who feel deeply alone.

We are made for community. The prayers of scripture and the promises of God are for a gathered people and cannot be fully realized in isolation. The ministry of Jesus is filled with table moments. I love that the table gatherings were in different people’s homes: Matthew, Zacchaeus, Martha, Peter’s mother-in-law, among others. We are never told the details of the meal. The menu was never the focus.

The focus was gathering together and sharing life, laughter, tears, forgiveness and, most of all, hospitality. Hospitality is the heart and soul that sees the other person and receives them.

The lessons of that women’s retreat have come back to me often. When I feel isolated and alone, I can interpret it as a rejection from others. And certainly, there are individual rejections that are true. But if I create space to reflect on what God might want to do with this loneliness, it often comes down to finding boldness to ask for help from others, to approach another rather than assume rejection, boldness to enter into the life of the other with curiosity and love. And as I gather with others at tables (my own, theirs or the coffee shop), space is created for the communal life of God with all its richness, connection, laughter and new mercies.